Water electrolyzers without a membrane have the potential to make green hydrogen more energy efficiently and cheaper. Perhaps the simplest type of membraneless electrolyzer consists of two vertical parallel plate electrodes with upwards electrolyte flow separating hydrogen and oxygen bubbles, avoiding the formation of an explosive mixture. The faster the flow, the thinner the bubble plumes and the closer the electrodes can be placed together, resulting in a higher energy efficiency. Natural convection can only provide modest velocities. Forced flow can provide higher velocities, but to avoid turbulent mixing of the bubble plumes, these are limited to similarly modest laminar flow velocities.

To determine how tall a membraneless electrolyzer can be made while still avoiding overlap between the oxygen and hydrogen gas plumes, we developed an analytical model that we verified with a more complete computational model and validated with experimental data from the literature. Based on our model we show that natural convection can allow safe and efficient atmospheric membraneless electrolysers up to about 5-10 cm height, while forced flow adds another 10 cm. At higher pressure, or by inducing smaller bubbles, taller or more energy efficient electrolysers of this type can be made.

See this previous post for an alternative type of membraneless electrolyzer.

The electrochemical reduction of CO2 from flue gas, or even directly from the atmosphere, to useful products is an alluring prospect. Liquid fuels like gasoline can be made our of just air, water, and renewable electricity. One of the most promising routes is to reduce CO2 and H2O to CO and H2, or syngas. This can be done in a gas-diffusion electrode using silver catalyst particles.

In a previous post we reported on a fully analytical multiphase model of the gas-diffusion layer (GDL). Recently, we succeeded in making an analytical model of the catalyst layer (CL), including transport, electrochemical reactions and homogeneous reactions involving CO2, OH–, HCO3–, and CO32-.

Our publication comes with a spreadsheet you can download that implements our analytical model.

In alkaline water electrolysers for hydrogen production, mesh electrodes are separated by a porous separator to avoid mixing of hydrogen and oxygen bubbles. Since the ohmic resistance increases with the distance over which the current travels, you would expect that minimizing the distance between the electrodes leads to the highest energy efficiency. Therefore, the so-called zero-gap configuration, in which the electrodes are placed directly adjacent to the separator, has become the standard in industrial electrolysers.

However, it has been found, time and again, that the ohmic resistance of zero-gap configurations is substantially higher than expected from the separator resistance. This can be partially attributed to the current lines not being straight in a zero-gap configuration, see the below figure. With detailed measurements we find that over the course of approximately 10 seconds the ohmic drop further increases. This can be attributed to the formation of gas bubbles, see the below figure. With this, we can now finally explain the anomalously high ohmic drops found in zero-gap water electrolysers.

Besides these bubble-induced losses, our detailed measurements further quantify the often-overlooked effect of dissolved gases on the equilibrium potential (Eeq in the below figure) as well as the concentration overpotential due to hydroxide depletion, only relevant at low electrolyte concentrations.

We also show that with a very small gap the ohmic drop can be significantly reduced, see the above figure. This initially counter-intuitive result can now be understood by the gap being large enough for bubbles to escape, allowing the current lines to become straighter. This simple and cheap way of increasing the efficiency of hydrogen production likely also leads to improved durability of the electrodes and separators as well as reduced gas cross-over. This can increase the turndown ratio, important for flexible operation of electrolysers with renewable energy. 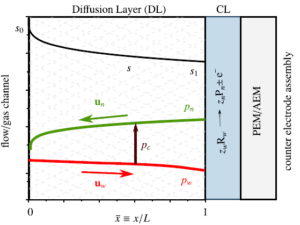 Many types of fuel cells and electrolyzers contain a diffusion layer, in between the reactant flow channels and the membrane. This porous layer protects the catalyst layer and provides an electronic connection to the current collector.

To allow reactants to reach the catalyst layer by diffusion, this layer should not be too thick. Liquid products can block the pores. We needed a somewhat lengthy and analysis to show that the resulting maximum current density reads

The first part describes the well-known diffusion-limited current density. The second term describes the reduction of the limiting current due to products blocking the pores. Here jn is a characteristic current density depending on e.g. reactant viscosity and surface tension, and λ is a parameter describingthe the pore size-distribution .

The effect of the second term in this equation is usually not dominant, decreasing the limiting current by less than half. Therefore, perhaps somewhat underwhelming, the result of our mathematical exercise is that modern diffusion layers are quite well-designed. At least we now know why and under what conditions.

Rajora, A., & Haverkort, J. W. (2021). An Analytical Model for Liquid and Gas Diffusion Layers in Electrolyzers and Fuel Cells. Journal of The Electrochemical Society.

When making hydrogen in an electrolyser, at the same time also oxygen is produced. To avoid an explosive mixture, a sub-microporous separator is placed in between the electrodes. However, this separator leads to large energy losses and allows dissolved gas to pass (see also https://jwhaverkort.weblog.tudelft.nl/?p=140). 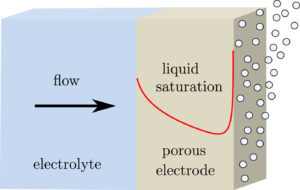 Electrolyte flow can be used to separate all hydrogen and oxygen and make for a membraneless electrolyser.

The question is whether flow can ensure separation more energy-efficiently than a physical separator. Using a combination of modelling and experiments we found the answer to be: yes!

Placing the electrodes approximately half a millimetre apart the ohmic losses can be made much smaller than with a separator, while the pumping power adds only a small additional loss.

In a simple electrolysis experiment we found the cathode electrolyte level to decrease by several centimetre over the course of an hour, while that of the anode increased by a similar amount.

Since water is consumed at the cathode and produced at the anode and hydroxide ions drag still more water to the anode, this is an unexpected result. Our explanation is that the electric field, acting on positive charges near the separator pore walls, gives rise to an electro-osmotic flow from anode to cathode.

This flow impacts the limiting current as well as the crossover of dissolved hydrogen and oxygen and can therefore be useful in increasing the hydrogen purity and extending the operational range.

Since water is the reactant in water electrolysis, you may be excused for thinking there will be no diffusion limitations. However, at the anode of an alkaline water electrolyzer the reactant is hydroxide (OH-), produced at the cathode. Although usually present at very high concentrations c0 of 6 or 7 M, these ions may deplete at the anode, leading to a limiting current density given by:

With a typical separator thickness L of 0.5 mm and effective diffusivity D– of  10-9 m2/s this gives about 0.5 A/cm2, in the operating range of modern electrolyzers.

In the following graph, the measured voltage over the separator can be seen to diverge when a current larger than i0 is applied. The dashed lines show the behavior expected from a simple model.

For more information on the these measurements, the model, and their relevance for hydrogen production see:

In many electrochemical stacks, a large fraction of the total volume goes to flow channels that transport reactants and products into and out of the cell. In the conventional bipolar ‘sandwich’ design, each flow channel borders only a single electrode. Pim van der Stighel, then a second year BSc student, in a process engineering & thermodynamics class suggested an alternative in which each electrode faces four other electrodes – sufficiently novel and promising to file a patent application together. Another team of BSc students, in co-supervision with Hadi Rajaei, made this into a metal-3D-printed prototype producing hydrogen. Our recent paper shows that electrolysers for hydrogen production can be easily made up to 1.5-2 times less voluminous, while for fuel cells or flow batteries the volume of the flow channels can even be reduced by a factor 3-4.

Worried about the practicality of making this on a large scale? A second patent was filed for a design with the same advantages, but conveniently manufactured from corrugated plate electrodes. 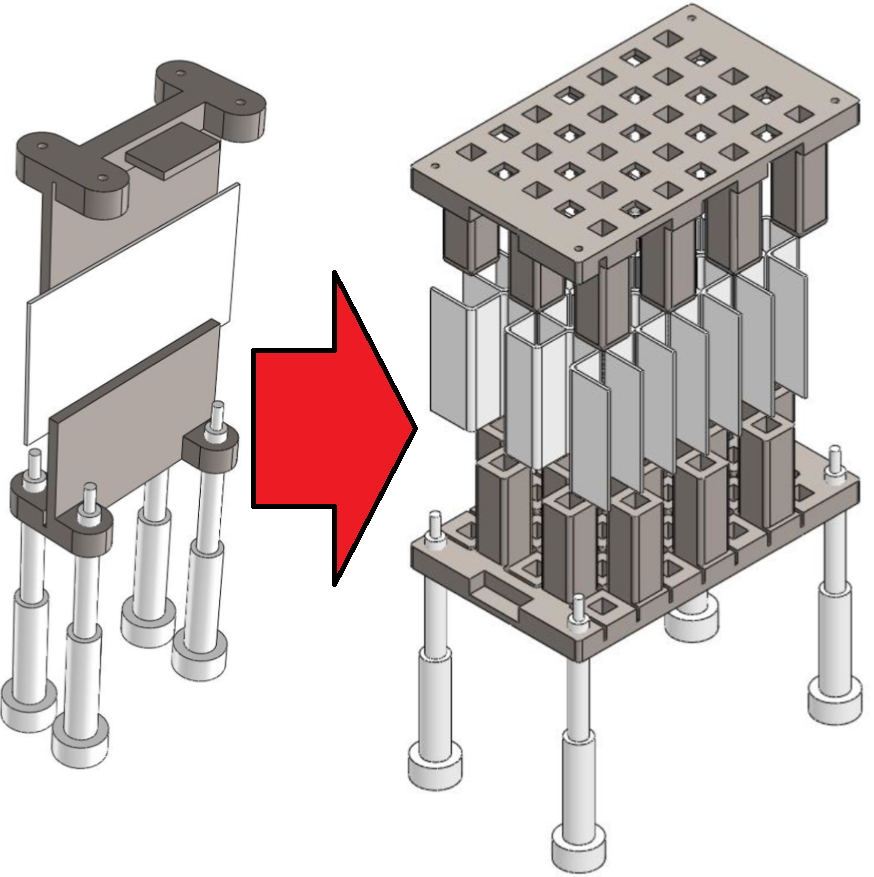 Most electrodes used in commercial applications like batteries and fuel cells contain electrodes that are porous to increase the reactive surface area. Strangely, a hitherto largely unanswered but important question is how thick such electrodes should ideally be. Thick electrodes will gives a high resistance while thin electrodes less surface area. Unsurprisingly there is an optimum, graphically shown in the below graph.

The dimensionless electrode overpotential versus electrode thickness. For the notation used see: https://doi.org/10.1016/j.electacta.2018.10.065

The seminal 1962 paper of Newman and Tobias provided exact but implicit analytical solutions. Introducing a generalization of the effectiveness factor concept, I obtained approximate explicit current-potential relations that are insightful and easy to use. Using these, analytical expressions could be derived for both the optimal electrode thickness and porosity of catalyst layers as well as battery electrodes.

“A theoretical analysis of the optimal electrode thickness and porosity” can be freely accessed through: https://doi.org/10.1016/j.electacta.2018.10.065

A poster summarizing the paper presented at Modval 2019 : poster

A short presentation adapted from a talk at the ISE 2018 conference in Bologna or at the ECCM Conference in The Hague in 2019.

An excellent first introduction to the modeling porous electrodes can be found at:http://www.joshuagallaway.com/?p=215