If you move an air parcel up in a quiet atmosphere its density will be higher than that of the air surrounding it so that it will fall back. The frequency of the resulting oscillation is called the Brunt–Väisälä frequency. The hot ionized plasma, inside the donut-shaped nuclear fusion tokamak, typically rotates around its central axis. The resulting centrifugal forces, similar to the effect of gravity, cause similar oscillations as in the atmosphere.

Through this effect rotation stabilizes and helps to keep the hot plasma confined. See also another post for a second positive effect of rotation. 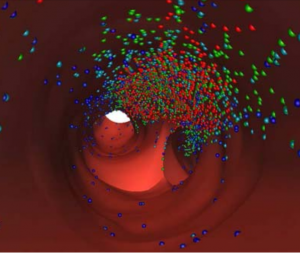 A widespread notion in the field of ‘ideal’ magnetohydrodynamics describing highly conducting fluids there can be no electrical charge accumulation. Any nonzero charge will quickly redistribute over a short enough time-scale to be irrelevant. One can however easily show that in the presence of a magnetic field Lorentz forces can act to sustain a finite charge density, see equation 3.  This charge and the associated electric field have a distinct influence on the current distribution and the resulting forces on non-conducting inclusions and bubbles in a conducting fluid as shown in the above picture and explained in the paper.